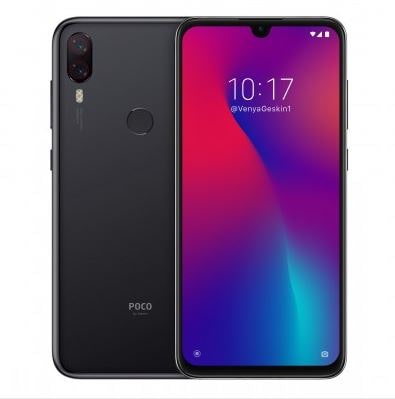 Indeed, Xiaomi Pocophone F1 is quite famous in India – a budget-friendly smartphone equipped with Snapdragon 845 Chipset and received a good reception from critics and users.

Let’s put Pocophone F1 aside for a short while and discuss its successor named Xiaomi Pocophone F2 in Australia which is most likely to hold its position on shelves in 2019.

The right opportunity is being provided by Ben Geskin who has posted a bunch of images on Twitter, indicating us a concept of Pocophone F2.

Based on that images, Pocophone F2 would be characterized by a dual rear camera – positioned vertically and a sensor to recognize a fingerprint – placed in the center on the back of the handset. Moreover, the biggest screen with frames reduced to minimum terms as well as a waterdrop-like notch design.

Going a couple of days back, Pocophone F2 has also appeared in a Geekbench database which confirms a fact that Xiaomi is working on it.

The handset is referred to on a listing as Pocophone F2 and Pocophone F2 specifications include Android 9.0 Pie Operating System and oddly – powered by SDM 845 which we have already seen on Pocophone F1. Chances are it will get the same RAM as well – 6GB.

We are expecting that Xiaomi will focus on the improvement of a camera sector – most probably one of the aspects which haven’t completed convinced many users.

0 0 votes
Article Rating
Source:Twitter
Via:Gizchina
Share on FacebookShare on Twitter
the authorStaphanie Kyle
Staphanie Kyle is one of the youngest members managing gadget reviews and other high priority news and stories for TechenGuru. When she isn’t working, you can find her listening songs and watching documentaries and sports.
All posts byStaphanie Kyle
Subscribe
0 Comments
Inline Feedbacks
View all comments