A well-known Chinese brand “Xiaomi” isn’t only known for launching smartphones one after another but also has covered an extensive amount of other gadgets, electronics even home furnishings. Well, everything aside for a short while, Xiaomi has just announced its Mi Router 4C router in China. The 4C Router seems a successor to Xiaomi Mi 3C Router which was landed on shores earlier in the year.

The 4C Router doesn’t house any special upgrade but similar features as compared to Mi Router 4 – one of them being the 4 Omni-directional antennas are attached with it. The Mi 4C Router has already started landing on shores in China and it sets you back only CNY 99. The device is available via Xiaomi Mall, Xiaomi Home, Tmall, and Xiaomi Youpin. 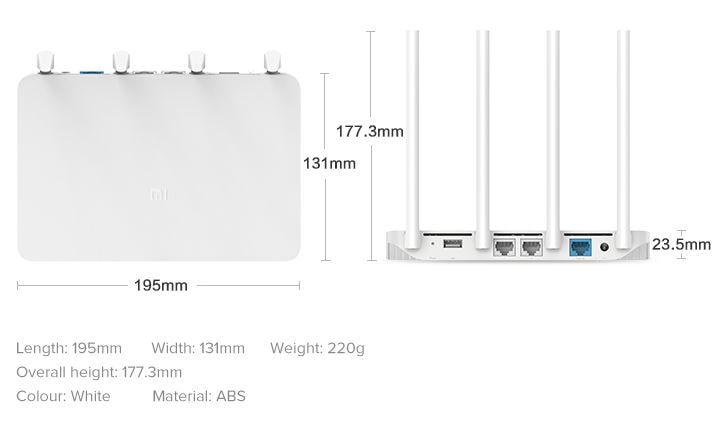 The Xiaomi Mi 4C Router is available only in a simple white colour and boasts a slim and sleek chassis which sounds similar to Mi 4 Router.

“The Mi Router 4C is an entry-level variant of Mi Router 4. The device holds an impressive 64GB of onboard memory which is one the major differences as compared to 128MB of DDR3 RAM and NAND flash storage features on Mi Router 4”.

Digging down inside Mi Router 4C, it houses a smart App management system which carries certain remote operation too. Most important of all, the App is said to be available for both Android as well as iOS devices. However, other specifications are yet to be released. Chances are Mi Router 4 will follow the same line of Mi Router 4.

Let’s expect that Mi Router 4 will be backed by dual-band Wi-Fi and peak speeds of 1,167Mbps. Some online sources have suggested that it can support connectivity to 128 devices simultaneously. The MiNET is also expected to be inside Mi Router 4 which enables it to connect with smart devices by clicking a button.

As mentioned above Mi Router 4C is available to purchase in China at CNY 99 but there are no words suggesting if this device will be released in India or other countries.