India’s number one smartphone brand “Xiaomi” is getting hype more and more day by day not only in the flagship segment but also in the mid-range department. Xiaomi has a smartphone no matter if you want a flagship smartphone or budget-friendly handset with fully-baked features. Interestingly, Xiaomi, very much like Asus and Razer, has released a smartphone for gamers named Xiaomi Black Shark back in 2018. 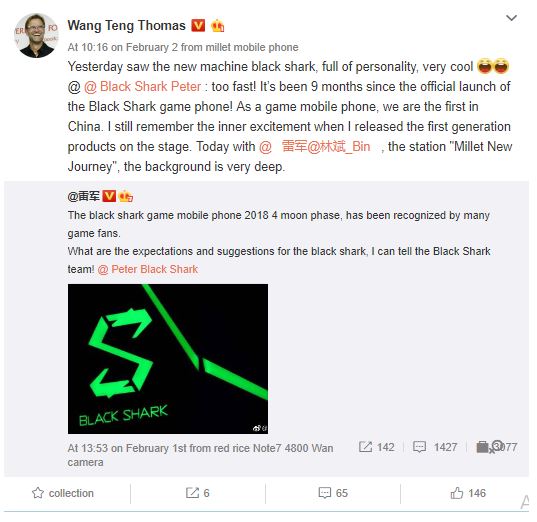 Now, seems like Xiaomi is about to release its another latest and coolest smartphone for gamers named Xiaomi Black Shark 2 (codenamed Skywalker).

Mr. Wang Teng Thomas (Weibo Company Product Director) disclosed their fans that he has seen Xiaomi Black Shark which is very cool and full of personality.

Like all other smartphone brands, Xiaomi is working on a successor to its Back Shark handset which is loaded with Qualcomm’s upcoming Snapdragon 855 Chipset, a whopping 8GB of RAM and Android 9.0 Pie.

Back in April 2017, Xiaomi released its first ever gaming smartphone “Xiaomi Black Shark” and then followed it up with Black Shark Helo later which has a hefty 10GB of RAM in October. According to the reports circulating across the Internet indicate that Black Shark 2 will be landed officially in March or April.