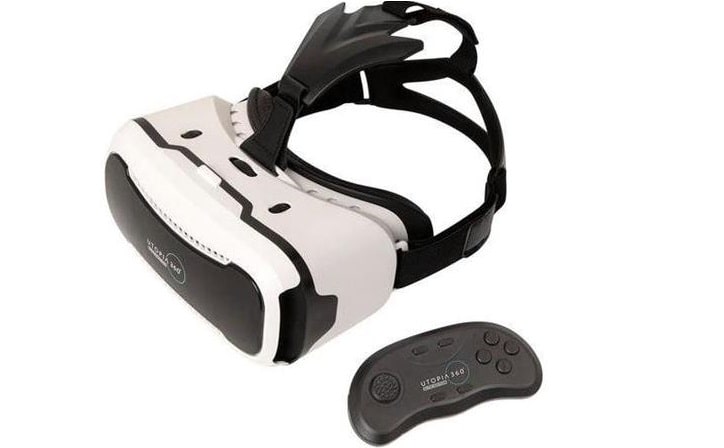 Utopia 360 Headset comes from the technology where they have used good technical knowledge plus experience in the field of virtual reality which makes it one of the best gaming headsets. Unlike most of the other VR headset, it has a special feature to support virtual reality apps which helps you to see the composite images of the world around you. This feature held Utopia 360 Headset ahead of other VR headsets in games. You can check out this review of Utopia 360 VR headset if you want to know more about its features.

Since Utopia 360 VR Headset is a smartphone headset so while playing any games or watching something the performance and the quality of images totally depend on your phone’s performance and display quality. However, in the same pack, you get the eight buttons Bluetooth controller that will help you to easily control the map of your VR and the built-in HD headphones to give you immersive experience while playing your favourite games in the on in the headset.

Setting up Your Utopia 360 Headsets for Playing Games on Smartphone

Now that you have got a Utopia 360 VR headset to play games on your smartphone, now you need to set it up to play Virtual Reality games J Setting up your Utopia 360 Headset ready for the games is quite simple as it comes with a quick simple guide to set up the apps. And we will tell you how you can use your VR headset for playing games.

Utopia 360 VR headset is cool enough to get attraction from the viewers whether it’s about quality or the price in this range. Easy setup with eight button Sega controllers and a 360-degree field of view with the support of numerous apps and games.

The first alternative to Utopia 360 VR headset for virtual gaming is Noon VR Pro. It has many features same as Utopia 360 headset and also comes at the same price. NOON VR remote software enables pc-to-VR streaming to watch any videos on your headset via Wi-Fi. It is compatible with most of the Android and iOS devices.

In this article, we have told you how to use utopia 360 headsets for games and we hope that you have found this article useful for using your VR headset for playing games.

Thanks for visiting us and don’t forget to ask questions if you get some problem while using the utopia 360 headsets for playing games.