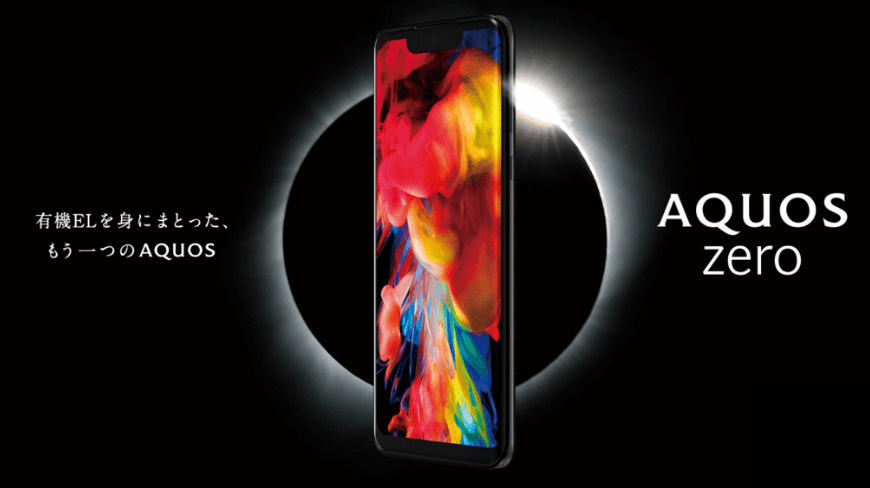 The day before yesterday, Sharp unveiled its latest, greatest and coolest smartphone in Japan named “Aquos Zero”. The smartphone is going to be the company’s first OLED-based panel as well as wide notch and on-screen fingerprint scanner.

The Sharp Aquos Zero specifications in Australia include curved 6.2-inches OLED screen with support for DCI-P3 color space and Dolby. The maximum screen resolution is 1440 x 2992 pixels and it’s arriving with a massive and impressive Notch.

Moreover, top bezels of Sharp Aquos Zero from left and right both are quite substantial as well. These are at least by usual notched smartphone standard. Wait! You’ll notice a small chin also, anyway, enough about that. The dimensions of Sharp Aquos Zero are 154 x 73 x 8.8 mm and weighs 146 grams. The weight is quite impressive thanks to its magnesium frame and aramid fibre back.

Sharp should proud of such achievement – housing one of the lightest flagships around, without a doubt. Although Kevlar is a type of aramid fiber but Sharp doesn’t mention that brand anywhere in its marketing materials. Therefore, we’re expecting it didn’t pay DuPont the associated licensing fees.

Digging down inside Sharp Aquos Zero, it’s backed by Qualcomm Snapdragon 845 Chipset with a whopping 6GB of RAM. The onboard memory is 128GB (not so sure if it’s expandable further) and has 3130mAh non-removable battery.

The handset runs on Android 9.0 Pie operating system whereas camera-wise, it’s coming with a 22.6MP rear camera with f/1.9 aperture. There’s a FaceTime sensor – 8MP for selfies and video calls. It is IP68 certified for water and dust resistance. Outback, you’ll see a fingerprint scanner and it has a Face Unlock System.

The official Sharp Aquos Zero release date in Australia is unknown but it’s expected to arrive before November is out. We’ll make out the comeback with in-depth review alongside full phone specifications later.