Samsung this year seems to have a busy Unpacked event on February 20th. It’s not only because of Samsung Galaxy S10 or S10 Plus, but also the long-rumored Foldable Smartphone alongside the latest smartwatch named Samsung Galaxy Sport in Australia.

It’s been a few months since we have heard a codename Pulse, but a new spotting by DroidShout has seen the device seem on Taiwan’s NCC certification site. That follows an appearance on the United States certification site, FCC and certification by South Korea’s NRPA who has suggested that it’s expected to be landed sooner.

Unfortunately, the certification didn’t reveal much about the Galaxy Sport watch according to the previous rumors and speculations, it’ll come in Black, Silver, Green and Pink Gold color options to choose from. 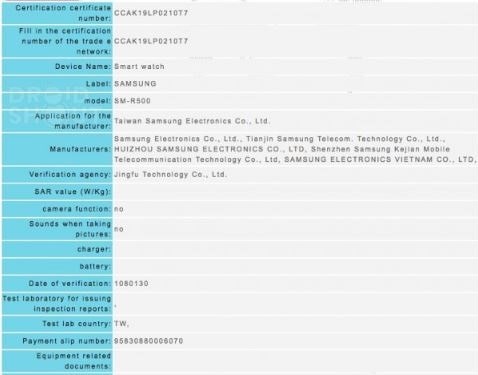 Being a successor to the Gear Sport, it’s expected to have a focus on fitness features again and waterproofing and a sportier look too as compared to Galaxy Watch that launched alongside Samsung Galaxy Note 9 back in August 2018. We are expecting to see 3rd party apps – something which will let down the Gear Sport.

Based on rumors of last month, Galaxy Sport will be having a 4GB of RAM and it’s most likely to offer Bixby with support for Bixby reminder. It’s a feature that currently missing from Galaxy Watch. The Samsung Galaxy Sport will run on Tizen OS instead of Google’s Wear OS.

0 0 votes
Article Rating
Source:droidshout
Share on FacebookShare on Twitter
the authorStaphanie Kyle
Staphanie Kyle is one of the youngest members managing gadget reviews and other high priority news and stories for TechenGuru. When she isn’t working, you can find her listening songs and watching documentaries and sports.
All posts byStaphanie Kyle
Subscribe
0 Comments
Inline Feedbacks
View all comments