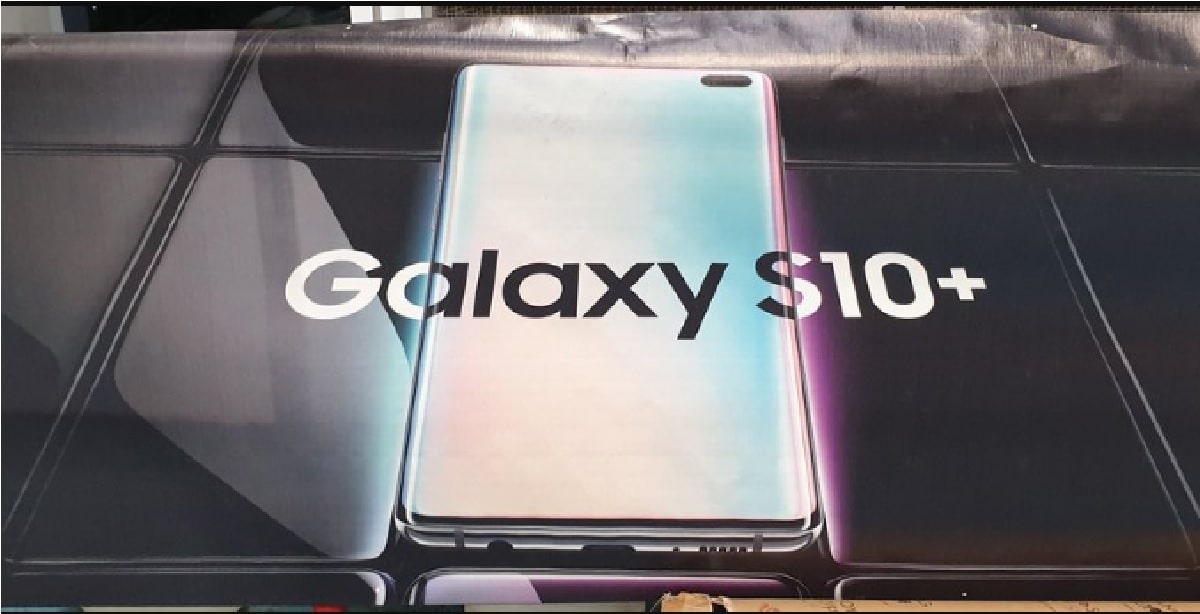 It’s been so many months since we have been hearing a plethora of rumors, suggestions, and news about Samsung Galaxy S10 Plus. According to the most recent leaks come from “@evleaks” who tweeted a banner image with a render of Samsung’s upcoming smartphone, obviously “Galaxy S10 Plus”.

The tweeted image is actually a banner which is we are going to see physically hanging up at an event. The banner indicates a shiny part of a matte material which is printed on in the direction of the top of the image.

Samsun Galaxy S10 Plus going to be released on Wednesday, February 20th in San Francisco alongside its all variants we have heard – like Samsung Galaxy S10, and S10E. At the same time, Samsung has confirmed that it’ll release its upcoming and world’s first and foremost foldable smartphone.

Aside from Galaxy S10 Plus and Foldable Smartphone, Samsung rumored to be released a smartwatch named Galaxy Watch Active which is originally suggested as “Galaxy Sport” with a 230mAh battery as well as onboard speakers, NFC, GPS, Heart Rate Monitor, LTE and 1.3-inches Display with a maximum resolution of 360 x 360 pixels.

There are actually three rumored Galaxy S models (as mentioned above) – S10, S10 Plus and S10E with 6.1-inches, 6.4-inches, and 5.8-inches screens respectively.

The lite version “10E” will have a dual camera outback with a side-mounted fingerprint scanner and out front, it’ll have an Infinity-O display with a single snapper for video calls and selfies.

The S10 and S10+, on the other hand, will come with an on-screen fingerprint scanner with triple camera configuration. In terms of selfie cameras, S10 will have a single whereas S10+ will be loaded with dual front-facing cameras.

0 0 votes
Article Rating
Via:Evan Blass ‏Twitter
Share on FacebookShare on Twitter
the authorStaphanie Kyle
Staphanie Kyle is one of the youngest members managing gadget reviews and other high priority news and stories for TechenGuru. When she isn’t working, you can find her listening songs and watching documentaries and sports.
All posts byStaphanie Kyle
Subscribe
0 Comments
Inline Feedbacks
View all comments