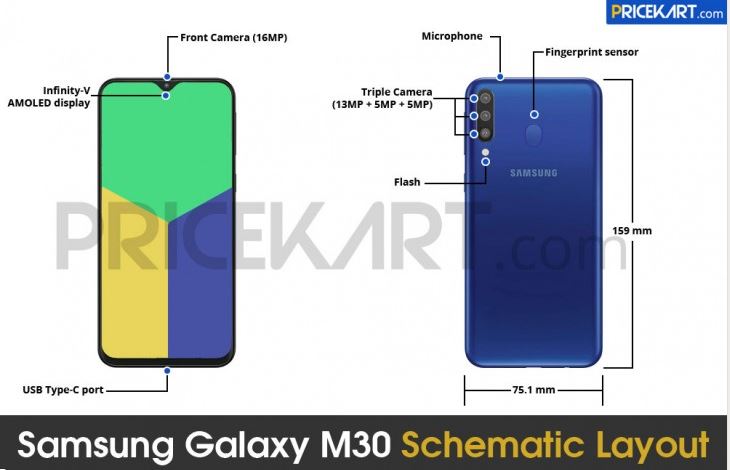 It’s been a couple of days since Samsung announced an all-new Series of smartphones “Galaxy M”. Ahead of an official announcement of M-Series, a plethora of rumors claimed that Samsung is going to launch smartphones named Samsung Galaxy M10 and M20 alongside Samsung Galaxy M30 in Australia. Well during an official unveiling, Samsung announced M10 and M20 and reported that M30 is on its way.

The handset is coming up with an impressive and large screen with a minimal bezel and an Infinity-V Notch that is housing a 16MP camera for video calls and selfies. It’s worth noting that a leak claims that it’s backed by an AMOLED display which sounds great. The right-hand side of the device is covered by a volume rocker and power button whereas a USB Type-C Port for data transfer and charging sitting on the bottom.

Outback, it’s made of plastic – very much like its younger siblings – M10 and M20. The back is being covered by a fingerprint scanner and triple rear cameras. The rear camera configuration of M30 has based on 13MP + 5MP + 5MP lenses and an LED flash.

Well, Samsung didn’t announce an official Samsung Galaxy M30 Release Date but, it’s assumed to be released before Q1 of 2019 ends. Going by the aggressive pricing of M10 and M20, it is most likely to set users back around 15K.

0 0 votes
Article Rating
Source:pricekart
Share on FacebookShare on Twitter
the authorStaphanie Kyle
Staphanie Kyle is one of the youngest members managing gadget reviews and other high priority news and stories for TechenGuru. When she isn’t working, you can find her listening songs and watching documentaries and sports.
All posts byStaphanie Kyle
Subscribe
0 Comments
Inline Feedbacks
View all comments