Samsung Galaxy M20 to Land on Indonesian Stores on February 14

Samsung in India has already been released its Galaxy M-Series and now all set to release Galaxy M20 in Indonesia on February 14th, 2019.

Online retailers named Lazada and JD Indonesia have added special pages of these devices ahead of their official availability. The JD Indonesia has stated that it’s going to hold its position on shelves on February 14th whereas Lazada has a page counting down, so far. 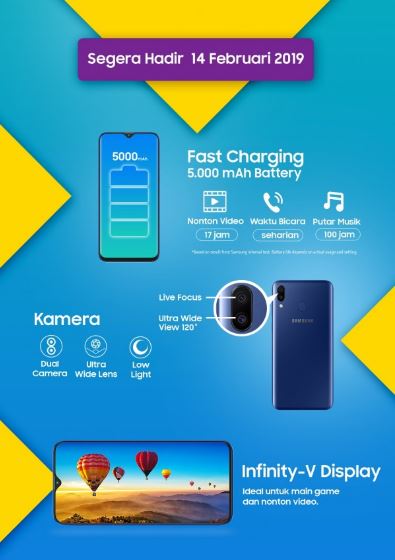 Taking a look at Samsung Galaxy M20 Specifications, it’s backed by a whopping 5000mAh non-removable battery that is expected to keep you up more than 17 hours with video playback or 100 hours of music playback including calls and messages. It also sports new Infinity-V Display and dual rear cameras.

Measuring a 6.3-inches screen with a waterdrop-like notch and is powered by Exynos 7904 Octa-core processor with 3GB and 4GB of RAM partnered with 32GB and 64GB of onboard memory respectively. Out front, there is an 8MP camera for selfies and video calls and 13MP + 5MP sensors are positioned. There is a rear-mounted fingerprint scanner as well.

It’s running on Android 8.1 Oreo operating system which will be upgraded to Android Pie 9.0 later. The handset has a hybrid SIM slot and you can swap a second SIM slot for a microSD card (Up to 512GB).

The Samsung Galaxy M20 Price is most likely to be INR 13,000 ($181). Now, you can get a general idea of how the handset might be priced. The latest mid-range M-Series of Samsung has plenty of value for its price, isn’t it?

0 0 votes
Article Rating
Source:jd.id
Share on FacebookShare on Twitter
the authorStaphanie Kyle
Staphanie Kyle is one of the youngest members managing gadget reviews and other high priority news and stories for TechenGuru. When she isn’t working, you can find her listening songs and watching documentaries and sports.
All posts byStaphanie Kyle
Subscribe
0 Comments
Inline Feedbacks
View all comments