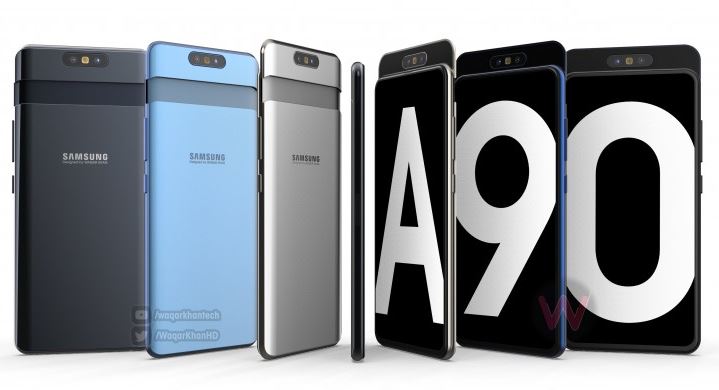 The world’s biggest smartphone maker Samsung has all set to launch the newest flagship in its Galaxy A-Series named Galaxy A90 on April 9th. As it’s a couple of days away from now, it has been part of numerous rumours and leaks and even a company unintentionally confirmed that it’s the first device which is going to house a notch-less Infinity screen.

And in order to achieve a notch-less screen, the company is likely to adopt a slider design – very much similar to the likes of Honor Magic 2 and Xiaomi Mi Mix 3. A plethora of details has now appeared about a slider design and how it’s going to be unique as compared to the rivals – offering the same design.

According to the new render, Samsung Galaxy A90 will be loaded with a slider which will raise its excellent dual camera system and most importantly, it’ll rotate to become the front-facing camera.

Based on a Twitter user IceUniverse, this renders made by Waqar Khan which means it’s almost correct. Such information was also verified by OnLeaks who said that it’ll house a sliding and rotating camera.

Smartphone brands are now racing to take the notch after Apple launched iPhone X in 2017. As we are far from in-section cameras, the biggest challenge is how the selfie camera is embedded, and while the popup camera on the Oppo F11 Pro and Vivo V15 Pro is the solution that seems most viable. If so, this Samsung design might win through the use of a back camera as a selfie camera, without the need for a second display which we have already seen on Nubia X.

Another advantage is that the Galaxy A90 appears to use a traditional earpiece better than some manufacturers’ acoustic displays. The renderer also shows that there is an on-screen fingerprint scanner on the Galaxy A90, but facial recognition support is likely to be lacking. The video also shows that two mechanical pieces will be present – one as a slider and the other as a rotating camera mechanism.