In the next couple of days, we’ll see an unexpected flagship smartphone from Samsung named Galaxy A8s in Australia and other regions which are rumored to sport an Infinity-O Display design alongside a small/little circular cutout for comprising a FaceTime sensor – that’s what we have heard yesterday. 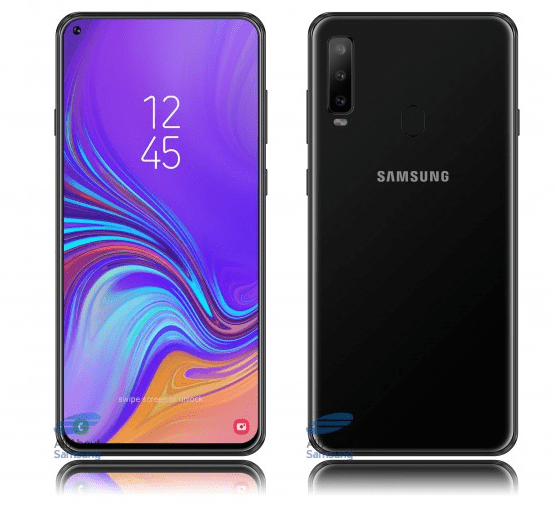 The upcoming Samsung Galaxy A8s comprises a triple rear camera configuration (similar to Samsung Galaxy A7 2018) and a rear-mounted fingerprint scanner. And out front, you’ll see a new Infinity-O Display Panel which has surfaced online giving users a real-world look alongside a cutout of a selfies sensor.

The handset is expected to go on sale with Samsung Galaxy A6s and Galaxy A9s by a South Korean giant in a few days. The hole on the front panel is likely to house a FaceTime sensor and a cutout sensor is likely to be a Proximity Sensor and Ambient Light sensor.

A German blog AllAboutSamsung claims that Samsung Galaxy A8s boasts an almost-bezel-free screen with a little chin right at the bottom – not larger as compared Samsung Galaxy S9.

According to the leaked images and rumors, a FaceTime sensor of A8s is positioned on the upper left corner of the screen – however – other reports mentioned that a FaceTime sensor isn’t placed under the display and will be visible.

The one thing we are sure is a triple rear camera set up with no information the sensors being used. Very much like other handsets, there is a rear-mounted fingerprint scanner – appears to be tiny and elliptical-shaped.

Aside from Galaxy A8s, a bunch of shots of an alleged Samsung Infinity-O Design Screen has already been surfaced. Well, most of the elements are pixelated but the cutout for a FaceTime sensor can be clearly seen placed on A8s’ upper left corner. That’s it.