The South Korean firm Samsung has just revealed its latest flagship namely Samsung Galaxy A8 in Australia with much-improved features than Samsung Galaxy S8. The A8 is the latest mid-to-high-end smartphone sliding in below the flagship S series and offering a colourful display, large battery, and exquisite camera experience.

The phone just launched before CES 2018 but shown off for the first time. The phone sports a 5.6-inches Full HD+ AMOLED display, 4GB/6GB of RAM, 32GB/64GB of onboard memory, 3000mAh battery and 16MP rear camera. To get to know a little more, we come up with Samsung Galaxy A8 review including its release date, price, and specifications. So, let’s get it on. 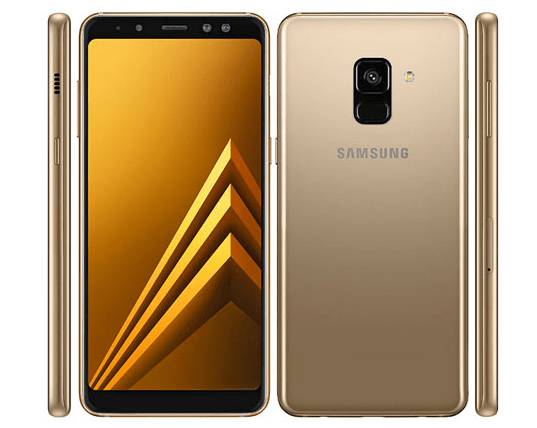 Without a doubt, Samsung Galaxy A series has got lots of better over the past few years. Samsung Galaxy A8 is now available in the UK and US via Vodafone. The phone packs 32GB/64GB of onboard memory and 4GB/6GB of RAM.

[ctt template=”8″ link=”3Z4le” via=”no” ]The Galaxy A8 has on 27 April 2018 become available all over the world including the UK, US, Germany, France, India, and China. The Samsung Galaxy A8 release date in Australia has also been confirmed and hitting stores across the country.[/ctt]

We have listed down Samsung Galaxy A8 specifications and features. Have a look!

The Samsung Galaxy A8 design is based on the concept of an A-line which means good-looking smartphone at a more affordable price. The lower and upper bezels have been trimmed just like Samsung Galaxy S8, but it doesn’t sport a complete bezel-less design.

The Galaxy A8 boasts a gorgeous 5.6-inches Super AMOLED display and sufficient Full HD+ resolution. The display is being supported by 1080x 2220 pixels at a density of 441 PPI. The brightness, contrast and viewing angles are all excellent thanks to AMOLED technology.

Moving towards its photography department, Samsung Galaxy A8 is doing things back to most other phones. Rather than having a dual camera on the back, and a single on the front, it has the reverse.

You will see a 16MP and 8MP sensor on the front with f/1.9 aperture. The front-facing sensors use Live Focus that gives you Bokeh effect to blur the background before and after capturing the photo.

There is a 16MP sensor on the back of the phone with f/1.7 aperture. The camera features are including Phase Detection Autofocus, Get-Tagging, Touch Focus, Panorama, and HDR. The Galaxy A8 doesn’t offer Autofocus, unfortunately.

The Phone runs on Android 7.1.1 Nougat which is obviously not the latest version of Google’s operating system, but it will be upgraded to Oreo later this year.

Samsung Galaxy A8 Battery and Connectivity

When it comes to the battery, Samsung Galaxy A8 is backed by a 3000mAh non-removable battery that keeps you online for two days under moderate use (calls, texts, WhatsApp or surfing YouTube). If you are a heavy user, it would still last you a day and a half.

The Galaxy A8 is equipped by a bunch of connectivity options such as Wi-Fi 802.11 a/b/g/n/ac, dual-band, WiFi Direct, hotspot, Bluetooth, GPS, NFC, and USB.

As compared to S-series, Samsung’s A-series have become an excellent choice. The Samsung Galaxy A8 is a solid smartphone with a high-quality camera, premium look, and long-lasting battery life. In terms of performance, it’s not as great as its price suggests. The Nokia 7 Plus and Motorola Moto G6 Plus are clearly more interesting and versatile. In case, Samsung Galaxy A8 price goes down over the course of the year, it would be an eye-catching option then.