Almost everyone is familiar with Samsung’s flagship Galaxy S smartphones such as Samsung Galaxy S10 and S10+ but as soon as you start looking beyond these devices for something budget-friendly, a portfolio of Samsung gets messy. There are a plethora of smartphones between Samsung’s numerous mid-range and budget offerings and interestingly Samsung Galaxy A50 is one of them.

Samsung has cleared that it’s the best mid-range and budget-friendly device with Samsung Galaxy A50 Price Australia $499 only – cheaper compared to Google Pixel 3a ($649).

We have spent plentiful hours searching for Samsung Galaxy A50’s performance in terms of camera, battery, and display. So, let’s keep going to explore it further. 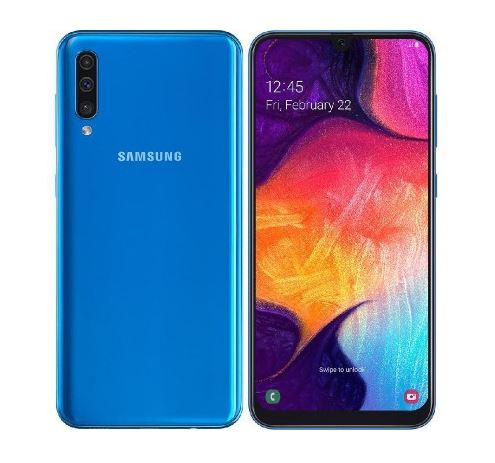 The phone looks unconventional when it comes to appearance. Only four colours are available to choose from i.e. Black, Coral, White, and Blue. It has got a glossy layer over its back panel which produces effects like a rainbow, but it depends on the light falls on it.

Though it feels premium but not as much as expensive flagship devices – thanks to its rear panel which is constructed using plastic. 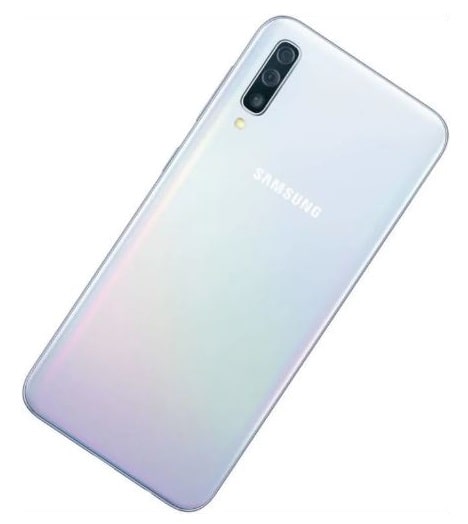 The A50 lets you use a microSD card via a dedicated slot – hence, you can use two SIMs simultaneously. The MicroSD card slot is positioned on the left of the phone whereas volume rockers with power button are holding their position on the right-hand side.

Unfortunately, Samsung didn’t add a dedicated button for Bixby so that you can use its power button to trigger the AI assistant.

The bottom of the phone is covered by a loudspeaker, 3.5mm headphone jack and a USB Type-C charging port. Furthermore, a trio-camera configuration is stacked vertically on the top left corner whereas an Infinity-U Super AMOLED screen with an in-display fingerprint scanner is available on the front.

The contrast ratio, however, isn’t beaten by Pixel 3a as Galaxy A50 offers plentiful brightness and sharpness. The viewing angles take it to the next level too and playing games, watching videos and more are immersive due to its bezel-less design. 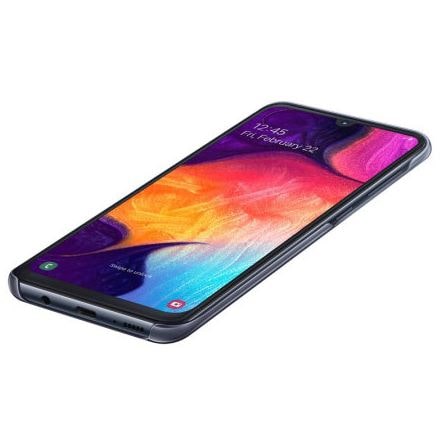 The Infinity-U notch doesn’t look gorgeous as much as a camera cut-out but Samsung has added numerous impressive animations to highlight its U-shaped notch. To cut it short, Samsung Galaxy A50’s display is one of the best in its class.

Very much like hundreds of Android smartphones, Samsung Galaxy A50 doesn’t come with a Qualcomm Chipset. Instead, it’s powered by Samsung’s own Exynos 9610 Chipset which is partnered with up to 6GB of RAM and up to 128GB of onboard memory (expandable further up to 1TB via a microSD card).

Performance-wise, it’s up to snuff and fastest even compared to Google Pixel 3a. The phone is superbly fast and doesn’t show any lag or glitch when it comes to opening various apps at once.

The Pixel 3a, on the other hand, feels more fluid but Galaxy A50 doesn’t perform flawlessly when taking Google maps. Moving around the map is smooth and silky but it gets lag occasionally. 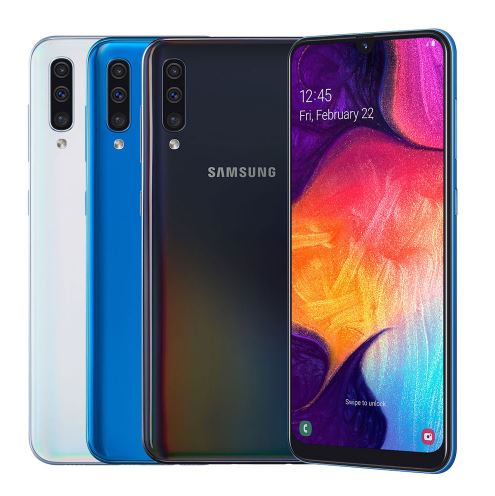 The handset scored 140,900 in AnTuTu and in Geekbench, it has scored 1683 in a single-core and 5389 in multi-core. The scores aren’t really impressive but it’s still an excellent phone with enough speed.

A user doesn’t face any problem with apps and can play graphics-enriched games and work on multiple apps at once without any sign of lag.

Digging down inside the beast, it’s running on Android Pie 9.0 operating system out of the box with One UI-based interface. We have already seen that software in Samsung’s Galaxy S10 smartphone.

It’s easy to use and it’s quite straightforward with loads of options to tweak it to your preference. It enables users to switch between gesture-based navigation and button and as mentioned above, there is an option to wake Bixby through a power button.

Samsung has oodles apps pre-installed to use it smoothly without any bloatware. Though there are not really a wide number of pre-installed apps it’s entirely guilt-free.

Samsung has promised three years of version and security updates. Mind-boggling? Thus, you can expect Samsung Galaxy A50 to run Android “S” later in 2010. Well, updates are necessary for almost every Android smartphone as it brings a lot of features and security updates keep your phone secure and protected.

A triple rear camera of Samsung Galaxy A50 includes a 25MP main sensor – paired with a 5MP depth sensor and an 8MP wide-angle lens. According to the report, a camera app slows down most of the time but captured images are exceptionally good.

The HDR is quite surprising and enables the phone to capture colourful images with a lot of details. The 8MP wide-angle lens enables creativity.

It’s, however, not without flaws. When it comes to fast-moving objects, it struggles a lot and since it lacks optical image stabilization, a user needs to stay as still as possible when capturing a photo. It comes with AI-assisted Night Sight Mode, making low-light images gorgeous and shiny but lower as compared to Google Pixel 3a. 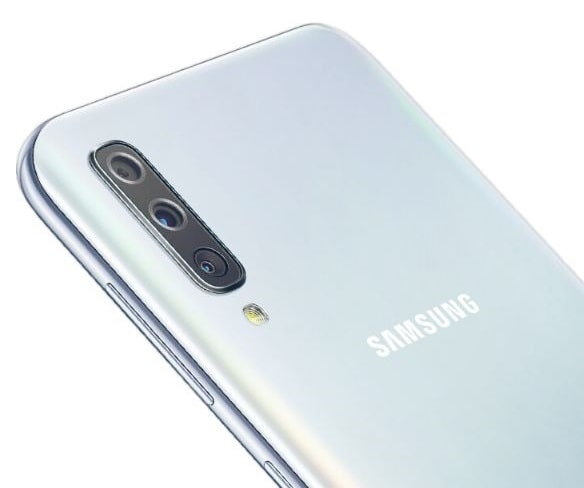 With the help of Live Focus, it captures great images but honestly speaking, Google’s devices do more. The Galaxy A50 has a 25MP front-facing camera which is capable enough to take decent selfies with your nearest and dearest – even with Live Focus mode. Expecting the same amount of detail like Google Pixel 3a can disappoint you, however.

Last but by means, not the least, Samsung Galaxy A50 is loaded with a whopping 4000mAh non-removable battery which can last an entire day with heavy use.

The user can perform activities i.e. capturing photos, messaging, gaming and music streaming all day long and there will still be a juice approx. 15% before you go to bed. With casual use, chances are you will stretch the battery life for two days with ease.

Based on a report from an authentic online source, one can play 1080p YouTube video over Wi-Fi for constantly 10 hours and 56 minutes. That sounds two hours more compared to Pixel 3a but it’s behind Google Pixel 3a XL. 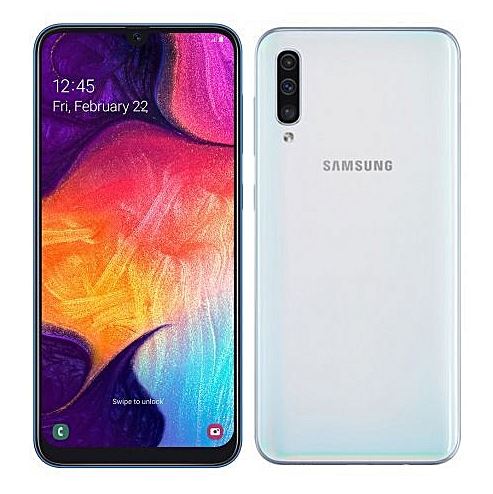 Getting the battery charged from 0% to 100% is super-fast, thanks to its USB Type-C port. Unfortunately, it doesn’t flaunt a wireless charging but it’s acceptable as far as its price tag is concerned.

8.2Should you get your hands on Galaxy A50? Frankly speaking, there is nothing wrong to complain about. Its perfect price tag puts it against the like of Pocophone F1 – thanks to its exceptional camera and solid performance. Well, Samsung Galaxy M30 can be bought after spending the same amount of price as it comes with similar sharp and vivid AMOLED display at the same price. But Samsung Galaxy A50 Australia looks premium, at first glance and it’s the device you would love to sport around. It houses One UI software and comes with a lot of power and we think it’s absolutely worth spending extra bucks to get all these benefits. What do you say?