We have already heard that Redmi is now an independent brand which is focusing on budget-friendly, entry-level or mid-range smartphone. But things seem to be changed as based on most recent reports, Redmi has started working on flagship smartphones and Redmi Pro 2 is no exception.

On Chinese microblogging website named Weibo, Redmi Pro 2 has surfaced which indicates that it’ll be loaded with a pop-up selfie camera and it’s not housing a wide or waterdrop-like notch – very much similar to what we have seen on Vivo V15 Pro and Oppo F11 Pro. The handset is most likely to land on stores with a Qualcomm Snapdragon 855 Chipset. 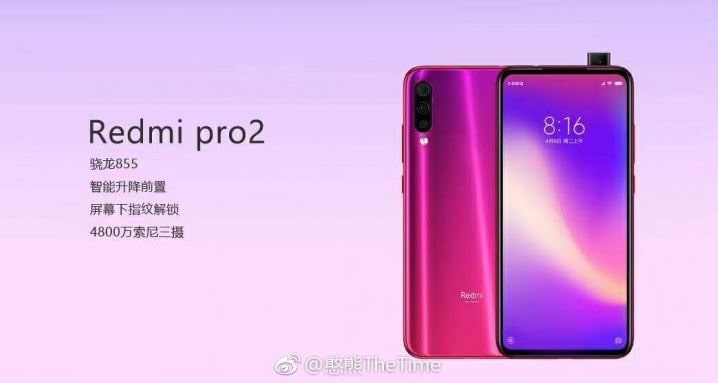 The details on Weibo show that the smartphone with a high screen-to-body ratio and gradient style back. This smartphone is housing an excellent triple rear camera configuration and as per the reports, the main camera sensor will be Sony IMX586 48MP sensor.

According to some online sources, the handset which looks a lot like Redmi Pro 2 was also spotted in Xiaomi CEO Lei Jun’s hands as well sometime before.

This shows that the launch of the handset is imminent. But, for now, there are no details about its launch and specifications across the Internet. Based on rumours, the smartphone is expected to be released in the second half of 2019.