Geekbench benchmark site revealed an unknown smartphone from Realme alongside quite a few of its specifications. Though Geekbench didn’t reveal a name of upcoming Realme smartphone but it’s coming with a model number RMX1833 and it’s rumored to be landed with a name Realme 3. 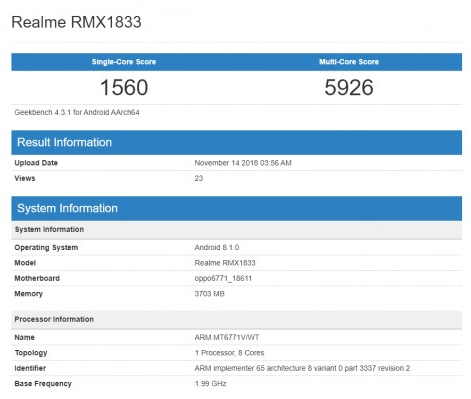 Based on Geekbench listing which was first spotted by Slashleaks, it’s backed by Helio P60 Processor which we’ve already seen in Realme 1 smartphone. So far, Realme announced total 4 smartphones – Realme 1 which comes with MediaTek SoC whereas Realme 2, Realme 2 Pro and Realme C1 are powered by Qualcomm’s Snapdragon processor.

Aside from a brain of upcoming Realme smartphone, Geekbench listing also shows a RAM and OS which is 4GB and it runs on Android 8.1 Oreo operating system. Sources also indicate that it managed to score 1650 in a single-core and 5926 in multi-core.

The CEO of Realme Mr. Madhav Sheth announced that Realme brand will introduce VOOC Fast Charging Technology in upcoming smartphones. And if it turns out to be true, the Realme 3 will then be the first smartphone under Realme lineup to house a VOOC Fast Charging feature.