The famous battle royale game “PUBG Mobile” has crossed 400 million downloads. And according to the gigantic Chinese software, Tencent has confirmed that it has more than 50 million active users out of China.

For the tech companies, gaming is becoming the next big frontier and Tencent is emerging as a clear winner. Fortnite is estimated to have 250 million players, and it made royale battle popular. The company is presenting a fresh update to celebrate the milestone with the introduction of the new 4 x 4 battle mode. A fresh map, custom skins, and comprehensive settings are also available in the update. 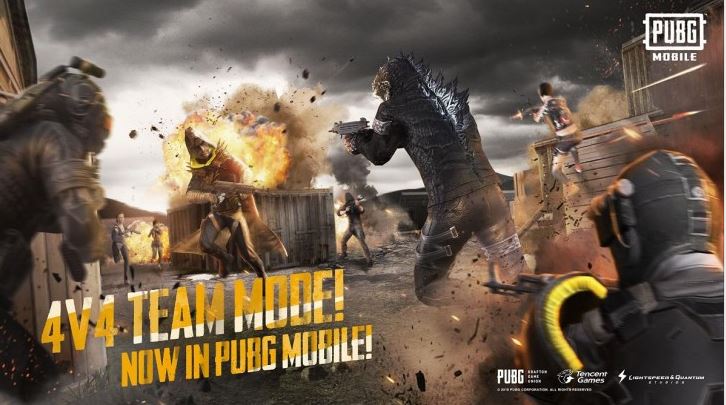 As a part of update 0.13.0, PUBG Mobile receives the fresh game mode. The PUBG Mobile 0.13.0 provides distinct first individual and third person control configurations. The new Team Deathmatch mode adds a timed respawn where teams can now “race to earn the most kills”. PUBG Mobile players can use the Godzilla: The King of the Monsters theme in the lobby.

The update also includes limited themed events. An enhanced third-party cheat avoidance scheme is included in the update as well. Moreover, the game also gets the latest latency indicator which is visible now from the main screen.

The update also includes the latest scheme that offers exclusive gifts for the Top 100 players. The update is now available on the App Store and Play Store, bringing improved items management. In Survive Till Dawn and Darkest Night modes, you will find so many zombie skins.

At Golden Joysticks last year, PUBG Mobile has already won “Mobile Game of the Year”. So far, this update has indicated that Tencent is not slowing down on adding new features.

0 0 votes
Article Rating
Source:pubgmobile
Share on FacebookShare on Twitter
the authorStaphanie Kyle
Staphanie Kyle is one of the youngest members managing gadget reviews and other high priority news and stories for TechenGuru. When she isn’t working, you can find her listening songs and watching documentaries and sports.
All posts byStaphanie Kyle
Subscribe
0 Comments
Inline Feedbacks
View all comments