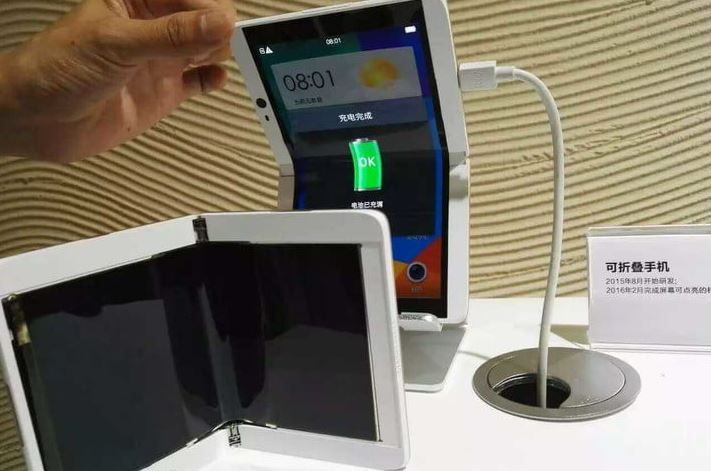 Samsung’s foldable smartphone “Galaxy X” and Huawei’s Foldable Smartphone are in news, but these 2 aren’t the only brands to launch smartphones with foldable screens which can switch between tablet and phone modes easily. ZTE has already been unveiled such a concept a year earlier. Now, Oppo has joined that race as well.

A recent patent of Oppo unveils that Oppo is working on a foldable smartphone which will open like a tablet. The phone will have a rear hinge but the front would house a sing and flexible display, said by Oppo.

The patents further show that the device would look something like a regular flagship smartphone – although with no bezels on one side – but that it could also open up to resemble a compact tablet.

Based on a rumour we’ve heard, foldable Oppo smartphone will be used with rear and front displays. We think Oppo should integrate the most powerful camera that is capable enough to act as both the front or back – depends on how the device is used.

All these patents aren’t necessarily an indication of what Oppo is working on. Oppo is one of the smartphone brands currently eyeing a foldable device along with Apple, LG and Samsung.

“A foldable phone is in development, but that there are technological hurdles to be cleared before its release in 2019”.

Around 3 months back, we did hear a similar Oppo patent, only that was for a phone which would bend backward. Right now, we’re at a little bit of a loss as to the benefits of that configuration, so the new design might look a lot like the more viable product.

With no doubt, foldable Oppo smartphone will open numerous opportunities for unique and dazzling apps/contents that wouldn’t just be capable of nowadays smartphones.

It’s still undecided when Oppo will release its first foldable smartphone worldwide but we wouldn’t be surprised if it goes on sale next year. There is also nothing to be surprised that it’s assembling a lot of patents.

It’s also unknown that when the patent filing was submitted, or if Oppo is chasing that design, but based on a history, it’s pretty likely.

We would love to discuss with you about the predictions of foldable Oppo smartphone. So, let’s have a discussion in the comments section below and don’t forget to share if you liked it.

Here is the Patent from Oppo