A Chinese smartphone maker Oppo just announced one of the priciest smartphones called Oppo Find X Lamborghini Edition in Australia (a special version of Oppo Find X). The Lamborghini Edition will be backed by Super VOOC charging feature which helps it fast charge its massive 3400mAh battery from 0% to 100% just in a couple of minutes, said by Oppo.

Oppo Find X Lamborghini Edition sports a gorgeous 6.42” AMOLED display which is well-supported by 1080 x 2340 pixels resolution for colourful, sharp and bright results. The device runs on Android’s latest 8.1 Oreo operating system whereas a dual 16MP + 20MP rear sensor lands with an LED flash for capturing photos in low-light. On the contrary, a solid 25MP pop-up camera is sitting on its front for giving users a great selfie experience. Not only this, users would be able to record FHD videos as well. 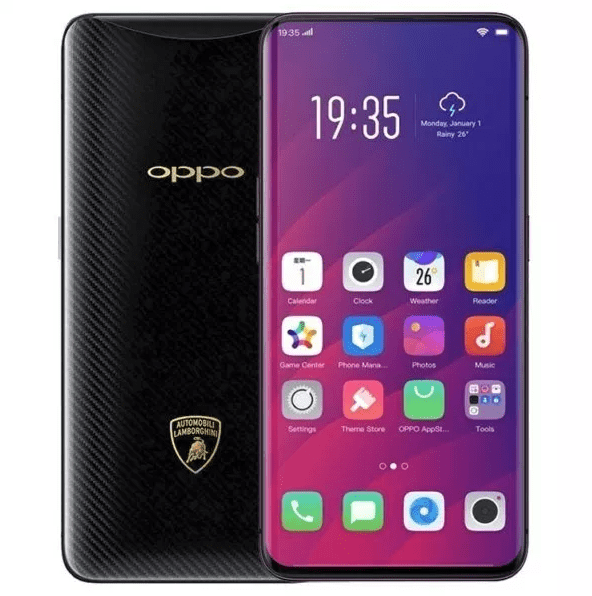 The Lamborghini Edition is powered by Qualcomm Snapdragon 845 paired with Octa-core processor. It’s aided by 8GB of RAM. This is an insane amount of RAM for a flagship device which is on par with several computers nowadays. The graphics are provided by Adreno 60 GPU. Working together, it gives users seamless performance whether you work on multiple apps at once or play graphics enriched games.

A 512GB of onboard memory is another thing which grabs user’s attention. And interestingly, it’s further expandable up to 400GB via dedicated microSD card slot (Hooray!). It’s a Dual SIM smartphone which accepts Nano-SIM and supports several connectivity options including 3G and 4GB networks. In terms of battery, it’s backed by 3400mAh non-removable cell.

On June 19, Oppo showed off its new Find X smartphone with a pop-up camera at an event in Paris. Now Oppo announced a partnership with Lamborghini in order to create a special version of the device. The Oppo Find X Lamborghini Edition release date in Australia is expected sometime in August 2018.

It’s undoubtedly to be expensive whenever it comes. The Oppo Find X Lamborghini Edition Price in Australia is expected a bit higher – around AU$2114. For now, it’s just our educated guess. More details will be shared when we hear more.

To dig down inside deeply, we have created a list of Find X Lamborghini Edition Specifications below. So, let’s have a look!

The Oppo Find X Lamborghini Edition isn’t just a premium flagship smartphone in terms of its state of the art features. The processing front device includes an insane 8GB of RAM and other specs play a vital role in delivering users flawless performance. Some of the dazzling features are just awesome such as hefty onboard memory, quality-oriented camera, and AMOLED display. Making a long story short, it’s an ultimate flagship smartphone users should get their hands on with immediate effects.

We would love to hear your thoughts about Oppo Find X Lamborghini Edition. And yes, if we missed something you know but we don’t, please let us know in the comments section below.