The Chinese smartphone brand “OnePlus” decided to ditch the notch for its upcoming smartphone named OnePlus 7 in Australia instead of going for a slider mechanism.

The reliable tipster SlashLeaks has posted images showing an alleged prototype of the so-called OnePlus 7 sized up against most recently released OnePlus 6T. Both handsets are sitting inside cases – hiding most of their bodies. The leaks unveil that – very much unlike its predecessor OnePlus 6, it’s featuring no notch and an all-screen design.

As there is no notch (not wide nor teardrop), rumors have suggested that OnePlus will opt for a slider mechanism to accommodate the selfie camera – sounds similar to Honor Magic 2, Mi Mix 3 and of course, Oppo Find X.

Beyond its lack of notch and apparently curved screen, leaked images don’t reveal much else about the next-gen OnePlus smartphone. Well, last year OnePlus confirmed that it’ll be going to one of the first OEMs to adopt Qualcomm Snapdragon 855 Chipset – so it’s most likely power the OnePlus 7. 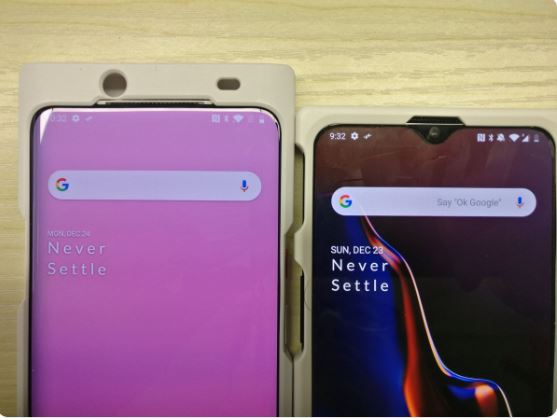 Will OnePlus offer 5G? We don’t think so as OnePlus has already announced that its first 5G handset will be the first in an all-new lineup from the company which will co-exist with its current array of numerically-branded handsets.

Other rumors and speculations have claimed that it’s going to be loaded with an on-screen fingerprint scanner – similar to that found on OnePlus 6T, a rear-mounted dual camera configuration, and most probably, no IP certification.

If OnePlus follows the release schedule of OnePlus 6, we can expect then to see OnePlus 7 somewhere in May 2019 and OnePlus 7T is most likely to come on shelves later in the year.

0 0 votes
Article Rating
Source:小白 Twitter
Share on FacebookShare on Twitter
the authorStaphanie Kyle
Staphanie Kyle is one of the youngest members managing gadget reviews and other high priority news and stories for TechenGuru. When she isn’t working, you can find her listening songs and watching documentaries and sports.
All posts byStaphanie Kyle
Subscribe
0 Comments
Inline Feedbacks
View all comments