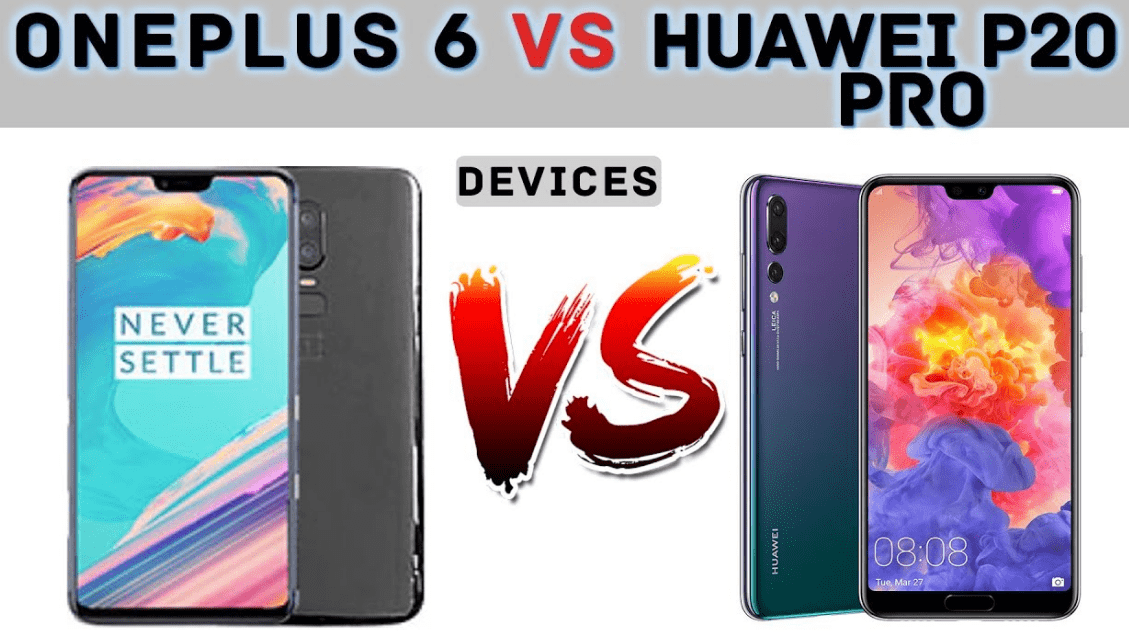 OnePlus and Huawei both are known as leading and well-demanded smartphone brands made a success in Western markets over the last couple of years. The Huawei announced its giant-slayer in the form of Huawei P20 Pro in Australia last month, whereas OnePlus 6 in Australia is released on 16 May 2018.

[ctt template=”8″ link=”y3AYD” via=”no” ]Both devices are now fully revealed, but which one you should get your hands on? Here is Huawei P20 Pro up against OnePlus 6.[/ctt]

Huawei P20 Pro got a massive diversion from its predecessor launched in 2017. The phone is loaded with a metal back which is shiny, gorgeous and rainbow-like. No matter what colour you go for, you would be getting one of the best-looking smartphones of 2018.

In short, OnePlus 6 and Huawei P20 Pro Design is similar to some extent as both houses glossy glass backs, notches on the front and waterproof up to IP67.

The OnePlus 6 boasts Full HD+ display which is being supported by 2280 x 1080 pixels resolution. The phone has a 6.28-inches AMOLED biggest screen with a 19:9 aspect ratios. The display is a bit bigger as compared to Huawei P20 Pro.

You would not notice much difference in brightness, sharpness and viewing angles in both devices.

The Huawei’s camera is co-engineered with Leica thanks to some AI-powered smarts. There is triple camera – 40MP (f/1.8) +20MP (f/1.6) +8MP (f/2.4) w/ Leica Optics capable of producing gorgeous night mode shots and up to 5X hybrid zoom for sharp photos. The front side is taken care of a 24MP camera allows users to capture moments with their near and dear.

The OnePlus 6 houses a dual rear camera made up of a 20MP + 16MP sensor. OnePlus’ camera is an area where it really shines. Based on numerous reports, OnePlus has made the main sensor almost 19% large and added OIS and super-slow-motion video capabilities.

The front side of OnePlus 6 is well-loaded with a 16MP selfie camera for getting photos with your loved ones.

As compared to OnePlus, Huawei smartphone prices are pocket-friendly thanks to Huawei’s low-cost policy. But when it comes to making a comparison between OnePlus 6 and Huawei P20 Pro, OnePlus has frequently whipped a march over Huawei.

Meanwhile, Huawei P20 Pro Price in Australia starts from AU$1099-1200 and is available from JB Hi-Fi, Harvey Norman, and Mobileciti.

Inside OnePlus 6, there is a Qualcomm Snapdragon 845 paired with an 8GB of RAM and up to 256GB of onboard memory. In a bunch of countries, OnePlus 6 is available in other variants – 64GB or 128GB, but these aren’t available in Midnight Black finish. None of OnePlus 6 models offer microSD card support.

The Huawei P20 Pro is powered by own in-house chipset instead of Qualcomm Snapdragon. You will see Kirin 970 processor coupled with either 4GB or 6GB RAM depends on which one you would go for. Both variants are equipped with 128GB of onboard memory that can be expanded further up to 256GB via microSD card.

Performance wise, both devices offer the users a lag-free experience when working on multiple tasks and playing graphics enriched games.

Here is where OnePlus 6 lacks. The OnePlus 6 is backed by a 3300mAh non-removable battery which isn’t quite capacious but keeps you online throughout a day under both casual and heavy usage in a single charge.

The Huawei P20 Pro wins with a 4000mAh built-in battery. However, we didn’t test it yet, but 4000mAh capacity battery absolutely provides sufficient power to keep you intact even up to two days.

The P20 Pro doesn’t support wireless charging, but despite the rear glass, OnePlus 6 doesn’t either, unfortunately.

As we have seen that both OnePlus 6 and Huawei P20 Pro have similarities. Conversely, OnePlus 6 houses Qualcomm Snapdragon processor, a notched display, Android Oreo, a glass back and fast charging indeed making it comparable to Huawei P20 Pro. As far as features are concerned, we feel that there is a bit difference in terms of camera. OnePlus 6 uses normal camera lens, while Huawei uses Leica camera that makes it stand out from the crowd.

Here is where the tale ends. Share your love with us by sharing. If we have missed out anything you know, please let us know in the comments section below.