Nokia to Bring its own Nokia 8.1 Plus with Pinhole-Camera for Selfies

Smartphones with a hole in the screen for sporting a front-facing camera are gaining traction as smartphone brands look at new screen designs to say goodbye to the notch. Huawei has already adopted that trend with its recently announced Huawei Nova 4 and Samsung is about to do so with its upcoming Samsung Galaxy S10.

Now, HDMI Global for Nokia smartphones is all set to join the fray with a punch hole display handset of its own. The @Onleaks brings to you the Nokia’s first 5K renders and 360-degree video of Nokia’s 8.1 Plus smartphone. Frankly, it’s yet to be revealed either it’s being called Nokia 8.1 Plus or something else.

According to the revealed image, it’ll be loaded with the biggest screen alongside a cut-out for the selfie camera on the top left corner of the handset. It’s having minimal bezels on both sides – however, the chin is a little thicker due to the Nokia branding. 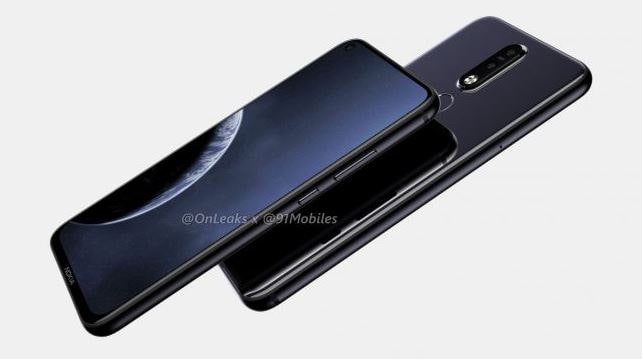 The screen is measuring 6.22-inches in size – identical to Motorola P40 which also comes with the punch-hole display.

On top, there is a 3.5mm headphone jack whereas, on the left edge, there are the volume rocker as well as power buttons. Talking about the bottom, it’s being covered by USB Type-C port and bottom-firing speakers and a hole for a mic.

Outback, we saw a glass panel with the Nokia logo in the middle and Android One branding towards the bottom of the phone.

Other Nokia 8.1 Plus specifications include a dual rear camera configuration with Zeiss lenses and dual LED Flash. The device is measuring 156.9 x 76.2 x 7.9 mm in size.

As most of the brands have moved toward the triple camera and on-screen fingerprint scanners, it’s unlikely that it’ll be a flagship smartphone which takes on the likes of Apple iPhone XS or Samsung Galaxy S10. Rather, it would be positioned as a rival to the budget-friendly smartphone named OnePlus 6T.

That’s all we know so far about Nokia 8.1 Plus. We are expecting more information about it to surface online in a couple of days. So, stay connected!

0 0 votes
Article Rating
Source:91Mobiles
Share on FacebookShare on Twitter
the authorStaphanie Kyle
Staphanie Kyle is one of the youngest members managing gadget reviews and other high priority news and stories for TechenGuru. When she isn’t working, you can find her listening songs and watching documentaries and sports.
All posts byStaphanie Kyle
Subscribe
0 Comments
Inline Feedbacks
View all comments