Unquestionably, world’s number 1 smartphone brand “Samsung” has been trying to the leader of innovations in Technology especially in a smartphone region. After getting a massive success from flagship devices such as Samsung Galaxy S9, S9 Plus, and super-powerful smartphone, so far, Samsung Galaxy Note 9. As compared to Galaxy Note 8 or 7, Samsung in Note 9 added a Bluetooth functionality to its signature S Pen.

Adding a Bluetooth functionality in a Stylus previously enabled users to use it as a selfie remote. It’s a kind of feature that was normally availed by buying add-ons. It was ideal for taking selfies with nearest and dearest and group pictures from a distance. 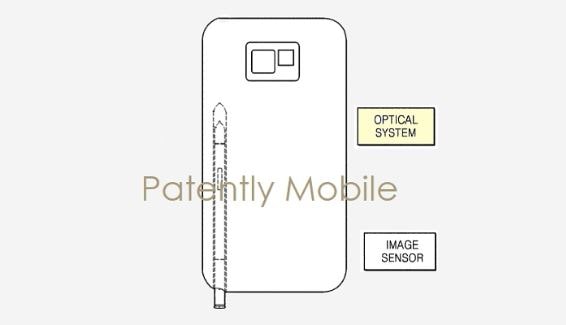 It seemed that Samsung is taken a step further with the inclusion of a built-in camera. So, capturing images will become a whole lot easier. Samsung has now officially granted a patent for the same by the Trademark Office and the US Patent.

What Does Patent Say?

The Patent was first filed back in February 2017 with the inclusion of “Electric Pen Device” with an “Optical System” that had a lens & an image sensor. This enabled users to control a camera from an external device. That obviously means a Bluetooth functionality will be retained in a new S Pen.

According to the Patent image, an optical camera sensor is set in an upper chamber of the latest S Pen. It has a control key which can easily control a zoom-in & zoom-out feature. It’s been more than months since that Patent was filed but we are expecting it to be implemented in the upcoming Samsung flagship device.

Not really sooner, though as an optical zoom would make a new S Pen thicker as compared to its predecessor. All we have to do is to wait for Samsung to make their move.

0 0 votes
Article Rating
Source:Patently Mobile
Share on FacebookShare on Twitter
the authorStaphanie Kyle
Staphanie Kyle is one of the youngest members managing gadget reviews and other high priority news and stories for TechenGuru. When she isn’t working, you can find her listening songs and watching documentaries and sports.
All posts byStaphanie Kyle
Subscribe
0 Comments
Inline Feedbacks
View all comments