Just hold your breath as LG is apparently working to release a super-exclusive version of its LG V35 ThinQ named LG V35 Signature Edition in Australia next month. Sounds like, we are going to see some much-anticipated flagships in August alongside V35 Signature Edition such as Samsung Galaxy Note 9, and Meizu 16 Plus. Based on a report from Asiae, the device will be a part of LG’s Signature range of electronics which will cost around 2.5 million (AU$2419). 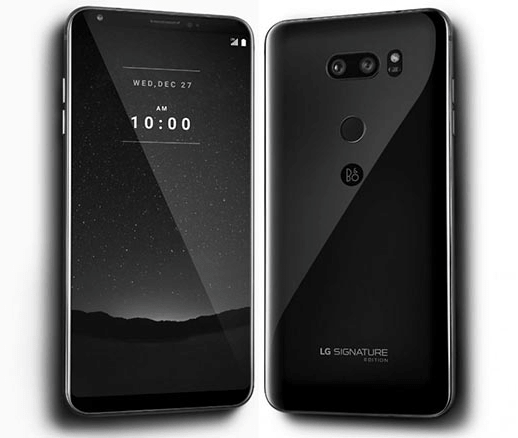 The LG V35 Signature Edition Price is justified? Let’s see what Asiae says in its report. The device is expected to be loaded with a couple of standard V35 features, starting with a whopping 256GB of onboard memory which is magnificently higher as compared to V35’s 64GB of onboard storage. Not only this, the already dazzling and stylish design is most likely to get some sort of luxury makeover which competes against Huawei Porsche Design Mate RS and Oppo’s high-end Find X Lamborghini Edition. LG is seemingly aiming for an August launch but several online sources showing that it’s not going to show up an IFA Berlin or anywhere else in the world. Let’s see what happens?

These features aside, the outlet expects it to be the same as LG’s standard V35 ThinQ. Chances are you’ll see a gorgeous 6” OLED display, a massive 6GB of RAM, a dual rear camera and Qualcomm’s latest Snapdragon 845.

Last year’s LG V30 Signature Edition didn’t land in Australia and sold only in Korea and was limited to roughly 300 devices with all of the available devices sold out during pre-orders. We are not sure, but rumours circulating around suggesting that LG V35 Signature release will presumably be similarly exclusive.

Instead of trying making money from its Signature Edition models – in spite of everything, LG’s last phone was available in limited numbers. The report further says LG hopes to raise the value of its band.

As mentioned above, LG isn’t only a company ready to release a premium version of one of its flagship smartphones. Oppo is ready to blow the market with its Find X Lamborghini Edition and Huawei released its premium and high-end Mate RS Porsche Design.

That’s all we have heard so far. LG didn’t reveal much about its V35 Signature Edition. We are keeping an eye on it and as soon as we hear more, we’ll update this story. So, check back soon.