Right after launching LG G7 ThinQ, LG has released its latest and updated version of LGQ8 (2017) named LG Q8 2018 with pretty impressive features. The new Q8 2018 is backed by some of the most surprising and state of the art features such as a gorgeous 16MP rear sensor and a front selfie camera of 5MP. The handset also includes 4GB of RAM alongside 64GB of onboard memory capacity. The LG Q8 supports full HD resolution of 2160 x 1080 pixels with biggest dimensions of 160.10 x 77.70 x 8.40 mm, making Q8 a highly interactive and valued flagship smartphone. 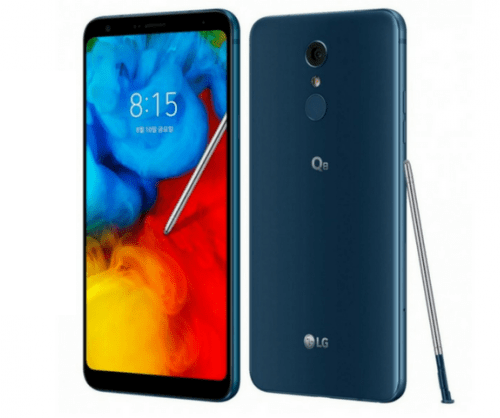 The LG G8 release date in Australia was August 2018, whereas it has also been released in other major parts of the world a bit before. The device isn’t too old but has got an excellent response from the market and as well as from LG fans.

As far as LG Q8 Price in Australia is concerned, it sets you back around AU$630-650. Chances are LG Q8 price may vary due to some market values and the fact that which telecom you are getting it with.

An updated version named LG Q8 2018 is a high-end Android-based smartphone housing a Metal Unibody design. The handset is surpassed with rounded edges on all sides and 6.2-inches biggest screen fits easily in the palm of your hand. The back side of LG Q8 is covered by a fingerprint sensor and a single 16MP sensor.

It’s powered by an Octa-core Qualcomm Snapdragon 450 Chipset and 4GB of RAM. The Q8 2018 is designed to eke out seamless and flawless performance. You can indulge yourself in games and can work on multiple apps simultaneously without any hiccups.

The LG Q8 2018 sports a gorgeous 6.2-inch 2160 x 1080 IPS screen – paired with marvelous viewing angles. The display is bright, crisp and vivid and offers good legibility even when placed under bright sunlight. The display also scratch-free thanks to its Corning Gorilla Glass.

In terms of a camera, LG Q8 2018 comes with a solid 16MP rear sensor which is being assisted by an LED flash to manage low-light images as well as videos. A standard 5MP sensor has covered its front to give users a wonderful selfie experience. The camera features are included Geo-Tagging, Touch Focus, Face Detection, HDR, Panorama, Auto Flash, Digital Zoom and a bunch of others.

The LG Q8 2018 is fuelled by a massive non-removable battery – 3300mAh which easily lasts you for more than a day with a moderate to heavy usage. However, if you’re a heavy user, a Quick Charging Feature has got you covered.

The device comes with 64GB of onboard memory space which can be expanded further by using a microSD card up to 2TB. With an expandable onboard memory of up to 2TB, one would not face any storage-related issues.

Last but absolutely not least, LG Q8 2018 runs on Android 8.1 Oreo operating system with no defined timeline of an upgrade.

The LG Q8 2018 is a little expensive smartphone but indeed delivers exquisite performance on all grounds such as cameras, display, multitasking, battery backup, and games etc. The overall design is gorgeous and it houses a waterproof and dustproof body. Making a long story short, LG Q8 2018 is one of the best gadgets which will make you stand out from the crowd.