Motorola seems to be working on another smartphone from its P-Series which will be available soon in Chinese markets – that’s what Onleaks via 91Mobiles published. Rather than an iPhone-esque display notch, it’ll house a hole-punch camera – sounds similar to Huawei Nova 4.

The rumored Motorola P40’s rear camera is also expected to be a 48MP – comparable to Huawei’s View 20 and Xiaomi Mi 7 (rumored). 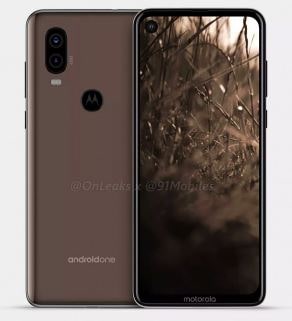 The smartphone is most likely to run Android One flavor of Android Pie and the 48MP sensor is a part of a raised dual camera array reminiscent of an iPhone and last year’s OnePlus 5T.

So far, it’s the 4rth smartphone from 4rth brand to house a hole-punch screen for sporting a front-facing camera. The other 3 names include Honor View 20, Nova 4 and Samsung Galaxy A8s.

The exact brain (Chipset) is still yet to be confirmed, but according to Motorola P30 (Snapdragon 636), it is expected to house a 600-Series Qualcomm Processor with a wall-to-wall screen along with a hole-punch front-facing camera.

The maximum resolution of the screen is expected to be 2310 x 1080 LCD affair with a little thick bottom bezel for the word mark “Motorola”.

Amazing design is rumored which is combined a forward-thinking screen and a lot of nods to the past and present in a form of a standard 3.5mm headphone jack as well as a rear-mounted fingerprint scanner.

According to the leaked images and video, the chassis seems to bear a glass rear panel which could enable for wireless charging.

A predecessor P30 was exclusive only to China – so expecting the same for P40 won’t be a surprise anymore.