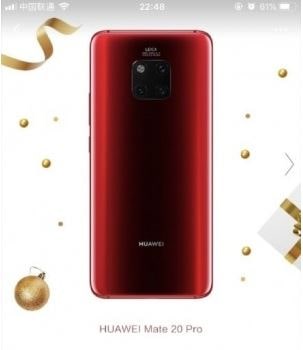 The biggest Chinese platform “Weibo” has suggested that a Fragrant Red and Comet Blue variants of Huawei Mate 20 Pro are all set to be released on February 5 (a day when Chinese celebrate a New Year). Aside from Fragrant Red, Comet Blue is yet to be viewed, but it has been seen in source code and how striking a Fragrant Red color is we are expecting Comet Blue to be equally dazzling.

So far, Huawei has not revealed any image of Mate 20 Pro in Blue color. So, it’s too prompt to discuss in details.

This time around, demand for Huawei Mate 20 Pro is extremely high, especially in China and India. Launching another variant in Red color will sell even more in China, without a doubt. And you would expect a red variant to sell like hotcakes in a country where the color red is considered lucky.

Camera-wise, Huawei Mate 20 Pro is loaded with quality-oriented camera lenses and comprises Huawei’s latest and super-fast HiSilicon Kirin 980 Chipset. With a whopping RAM and onboard memory, 40W charging, and on-screen fingerprint scanner, it’s an exquisite handset which is winning the hearts of so many people worldwide.

Sonos to Manufacture Some New Smart Speakers in 2019