HMD Global Schedules an Event for October 11 in India

HMD Global has already started sending invitations to the media for an event. But it doesn’t reveal what exactly this event is about? The invites only have text that reads:

HMD Global invites you to an exclusive gathering for an important announcement. Let the festive season begin! 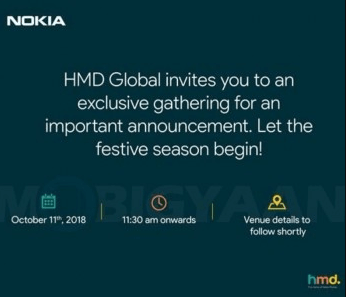 It is unknown what will HMD Global announce in an event on October 11 in India? But chances are we will see Nokia 7.1 Plus which is expected to go official on October 4.

The rumors around are also suggesting that Nokia 7.1 Plus will land under “Nokia X7” moniker in China.

The official Nokia 7.1 Plus release date is coming closer day by day and everything is getting clear more and more. As soon as we hear more, we’ll let you.