Back in October 2018, Google announced its latest and greatest Pixel smartphones named Pixel 3 and Pixel 3 XL. Though Google Pixel 3 is offering an 18:9 aspect ratio screen with thick bezels whereas Pixel 3 XL came with a notch screen for a higher screen-to-body ratio.

Now, things seem to be changed as Mountain View Tech Giant has finally planned to join the club of full-screen notch-free smartphone brands. Just a few days back, company has been granted a patent for a smartphone which will be the brand’s first and foremost smartphone to come with an edge-to-edge screen.

Google mobile patent, a couple of days back, appeared on World Intellectual Property Organization’s website. It includes a handful of sketches of this smartphone which shows off its complete design. The sketches show that it doesn’t house a notch and loaded with a full-screen display.

That handset seems to have no existent bezels around the display – eliminating even a relatively thick chin at the bottom from Google Pixel 3 XL. Outback, it looks similar to Google Pixel 2 XL. It’s sporting a single rear camera – accompanied by an LED Flash – apart from a fingerprint sensor. 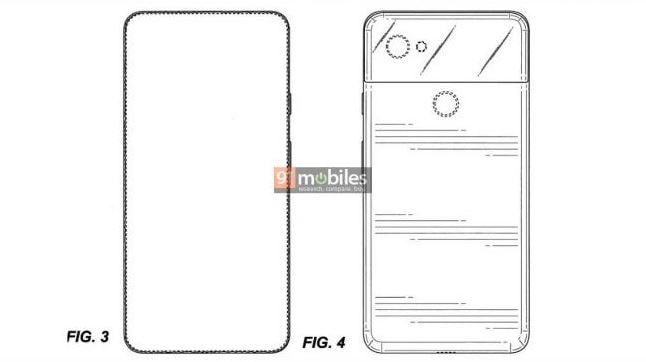 Further sketches indicate that it has a two-tone finish outback – very much like Google Pixel 2 XL. Both volume rockers and power button are seemed to be placed on the right-hand side whereas the left-hand side is covered by a SIM Card Tray.

At bottom, we can see a USB Type-C Port whereas the top contains a microphone. Unfortunately (or interestingly) it doesn’t house a 3.5mm headphone jack – like 2nd and 3rd generation Pixel devices.

Google is reportedly working on a budget-friendly smartphone named Google Pixel 3 duo which is most likely to arrive on shelves as Pixel 3 Lite and Pixel 3 XL Lite. We have already gone through a handful of CAD-based renders as well as 360-degree video of these devices. The Pixel 3 XL Lite popped on Geekbench recently – but, sadly, for now, there is no word when Google will officially launch these handsets.

0 0 votes
Article Rating
Source:91Mobiles
Share on FacebookShare on Twitter
the authorStaphanie Kyle
Staphanie Kyle is one of the youngest members managing gadget reviews and other high priority news and stories for TechenGuru. When she isn’t working, you can find her listening songs and watching documentaries and sports.
All posts byStaphanie Kyle
Subscribe
0 Comments
Inline Feedbacks
View all comments