The most-anticipated flagship smartphone from Samsung named Galaxy S10 leak is seemingly an official render of Galaxy S10+ (elder brother). This gorgeously designed beast is in line with other CAD renders we have already seen down to the placement of a selfie snapper and rear-mounted triple-camera system. That is if you count first render – the one that had 3 cameras instead of 4. 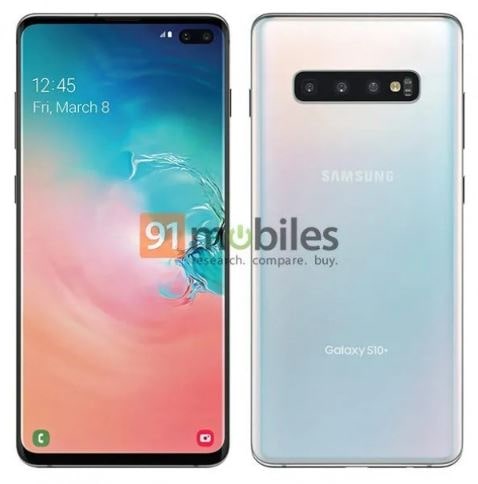 The release date on a render is generally significant and seeing how the event is going to take place on February 20th, 2019. Well, a bunch of sources has claimed Samsung Galaxy S10 Plus along with its younger brother S10 will be available for sale on March 8th.

Taking a look at the images of the phone’s front-facing dual cameras, positioned in a small cutout at the top right side of the display. We are wondering what extra features front-camera will come along. Would it be a wide-angle selfie camera? The display, according to the latest leaked images, has smaller bezels as compared to last year’s Galaxy S9 Plus which should equate to a higher screen-to-body ratio. The display is most likely to be based on AMOLED Technology alongside a QHD+ resolution.

Outback, it’s sporting some kind of white pearl color option with faint red and blue hues. Right next to the LED Flash, there is a triple-camera setup – positioned horizontally (Samsung Galaxy A7 2018, however, sports triple-rear cameras vertically) and heart-rate monitor that Samsung’s been using on its devices since the launch of Galaxy S5.

A fingerprint scanner is mounted right below the rear camera (as usual) but according to rumors, Samsung has an ultrasonic reader embedded in the display in both S10 and S10 Plus.

The Samsung Galaxy S10 and S10+ will be released at an Unpacked event which is going to take place on February 20th. Three variants with 5.8-inches screen, 6.1-inches screen, and 6.4-inches screen are expected to be announced. The brain behind the beast will be either Qualcomm Snapdragon 855 or Exynos 9820 Chipset – depends on which country you are living in.