Acer is now coming up with a bunch of latest greatest and coolest items at IFA 2018 – an event which is ready to shine in Berlin on August 31. Non more than its predator Thronos – an impressive and exquisite cockpit which is being billed by Acer as “Gaming Chair”. It’s only a titanic in nature as Thanos – exerting a tower desktop and 3 monitors. 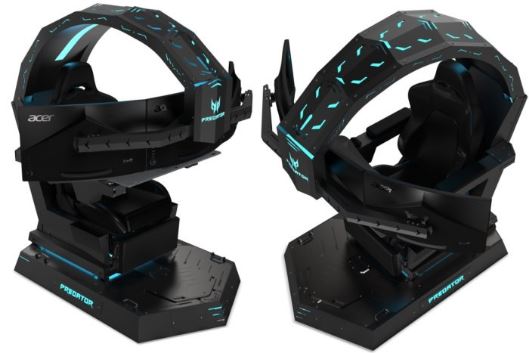 Measuring it around 4 ft. high – Throne-like Predator Thronos’s body is made of steel and houses a Two-Tone sensational colour scheme – Black with lit Blue accents and Black with well-lit white accents. This gaming chair looks a lot like ragged conventional out of science-fiction, delivering users “Cabin” which lounges around 140 degrees. Now digging down inside it, there is a vibrating chair which reacts to your on-screen action alongside comfortable footrest.

Right over the head, there is a tail looks like a scorpion – made of a metallic – holding three 27-inches display, sold not along with it – in front of your face. This metallic scorpion’s tail appears to be illuminated by several variants of Acer Predator Logo stretching out along the top, sides, and bottom.

Be noted, it’s only a chair to sit. Everything sits on a massive metallic base entire with illuminated “Predator” wording, floodlit accents and outback, there is a light creeping out somewhere from under it. Each side of the base, Acer mounted 2 handles. Hence users can drag this beast to their favorite spot.

“The all-new Predator Thronos reimagines the gaming chair for a new level of gamer”.

“It puts the gamer in the game through deep impact vibration, where the chair vibrates upon in-game impact. Integrated with a Predator PC and triple Predator monitors plus gadgets, the Thronos becomes more than a gaming chair—it’s a gamer’s cave”.

The Acer Predator Thronos Gaming Chair is what you can consider as an “extreme” upgrade by Acer. It will arrive with premium and high-quality PVC leather, exquisite and body-contouring design, adjustable armrest with a 180-degree recline, lumbar cushions as well as a headrest which you can be detached anytime you want.

Whether you deny or accept, it’s admittedly going to be pricey whenever it arrives. Acer, for now, didn’t say when will it be landed or how much this beast will cost. It’s expected that it’ll arrive before 2018 is out, along with Acer’s other latest gaming products, ready to shine in IFA 2018. Other products include monitors and peripherals based on Predator and Nitro brands.